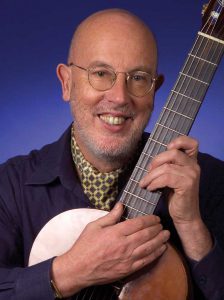 Born in Edinburgh, Scotland, educated at Edinburgh Academy and Edinburgh University, Michael Macmeeken is a graduate of the Real Superior Conservatorio de Musica in Madrid where he studied (1969-1975) with Jorge Ariza. He perfected his studies with Regino Sainz de la Maza in Madrid from 1968-1977. Further music studies followed and he taught the classical guitar at several state music education establishments in Germany, from 1978-2004. A resident of Heidelberg, Germany, he founded Chanterelle Verlag in 1979: This undertaking, one of the first in guitar circles to implement scholarly and scientific editing polices, was soon to be recognised as an important reference catalogue for classical guitarists and a source for much much previously unattainable guitar repertoire. Macmeeken owned and ran it until until it was acquired in 2013 by Zimmermann Musikverlage; since 2016 part of the Schott Music Group in Mainz. Michael Macmeeken still works in an advisory capacity for the publishing activities of Guitar Heritage.org. with which he is associated.